The Complete Studio Recordings is a compilation of songs recorded by local folk-singer and balladeer Emmanuele Cilia in 1931 and 1932, at the HMV studios in Milan.

On the 50th anniversary of his passing away, this release is a collaboration between Filfla Records and the Friends of the National Archives for the remembrance and posterity of these recordings and their value on a national level.

This LP includes a download card for access to the complete digital recordings of 38 tracks and additional data. 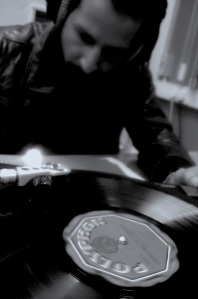 FILFLA RECORDS proudly presents, SINGING TO THE UNSEEN LECTURES; an uncommon listening experience and presentation of Maltese music from the interwar period (1931-32). A very particular selection of 78rpm records from the national collection of 160 discs, played off a turntable for enhanced listening and appreciation experience. The story of music and musicians will unfold through the music played off these ‘sonic sculptures’ and anecdotes related to this early recording phenomenon. Each three-minute song has a three-minute story to be told. The public will have the chance to listen to unreleased material and get an insight into the music and musicians as told by Andrew Alamango. There will also be the opportunity of an open public discussion on the subject.
Banca Giuratale, Mdina
Sunday 14th April
Two sessions :1530h , 1700h

Filfla Records, the local vintage music label is set to release the latest in a series of music publications this Friday 22nd June at Damato Records in St. John Street Valletta at 1900h. After the successful release of the publication Malta’s Lost Voices in CD-Book form, Filfla Records will be releasing another version of the book in double CD format.
Early in 1931, a group of musicians travelled from the port of Valletta to Tunis to record the very first records of Maltese music. what ensued was a social phenomenon which took much of society by storm. Malta ‘s Lost Voices is an intriguing account of musicians, composers, poets and songwriters who, contracted by the Valletta music agents, were sent to Milan and Tunis to record on the major record labels of the day, including HMV, Polyphon, Odeon and Pathe Records. This is the story of music and musicians who made history making the earliest records of Maltese music in the early decades of the 20th century.

This was a musical journey that changed the Maltese people’s perception of themselves forever. Musicologist and researcher Andrew Alamango will be launching the latest in a line of releases of Lost Voices products at Damato Records in Valletta on the 22nd June 2012.

On display at Damto Record Shop is an early recording machine recently acquired by the National Archives from Charles Carabott of Carabott Musical Emporium of Merchant str Valletta. This was originally brought to Malta by the late Marquis Scicluna and bought by Louis Carabott. It is an very early example of recording technology from the late 1920s which recorded messages and music onto aluminium discs as people would speak or play into its microphone.

FILFLA RECORDS, is a label name set up with the aim of releasing a series of productions of local, vintage music. To preserve and make this and other audio material publicly accessible. It indirectly aims to gather known audio sources in private and public collections to gather, catalogue and preserve in a sound archive for posterity. The project is supported by the National Archives and the Ministry of Education, Employment and the Family.

Work in Progress in the Social Studies (WIPSS),

On Wednesday 16 May, the WIPSS seminar welcomes Andrew Alamango, musicologist at the University of Malta. He will be giving a paper, with video clips and early sound recordings, entitled: Malta’s Lost Voices: the phenomenom of recording Maltese music in the interwar period (1931-32).

Wednesday 16 May, 6-7 pm. followed by discussion. Conference Hall, Europe House, 254 St. Paul Street, Valletta. PLEASE NOTE: the venue for this seminar has been changed from the Mediterranean Institute to Europe House, St.Paul’s Street Valletta. Please bring your ID card to show at the door. The public is cordially welcome.

Louis Carabott of P.Carabott Musical Emporium on Merchant street, Valletta, followed in the steps of Dr. F. Habib who had sent a group of musicians to a Tunis studio in early 1931 to record on 78rpm shellac records. These discs of popular and folk music turned out to a big hit with local audiences and many flocked the wholesaler’s store to purchase the music on the various labels of the day.

Louis Carabott and brother organised for musicians to record in Tunis in 1931 under ODEON records Ma series. These records were released and advertised in their ODEON catalogue featuring a variety of local artistes, composers and solo artists of sacred and classical music. These included exceprts Carlo Diacono’s opera  L’Alpino. The catalogue also features a variety of comical and theatrical artists from Kumpanija Indipendenza, as well as folk singers the likes of Ix -Xudi and Is -Semenza.

In later years Carabott would re-release some of he tracks form the original 78s  on its own label ‘Carabott-Dischi ta’ Malta’. Carabott approached DECCA label in 1960’s to reproduce some titles on 7” 45rpm.

The early recordings o Maltese folk and popular music are genuine and archaic documents of a musicological. and socio-political history we were totally unaware of until recently. The extent of the recording on 78rpm shellac records, and the musical variety is evidence of a once thriving musical and artistic scene. 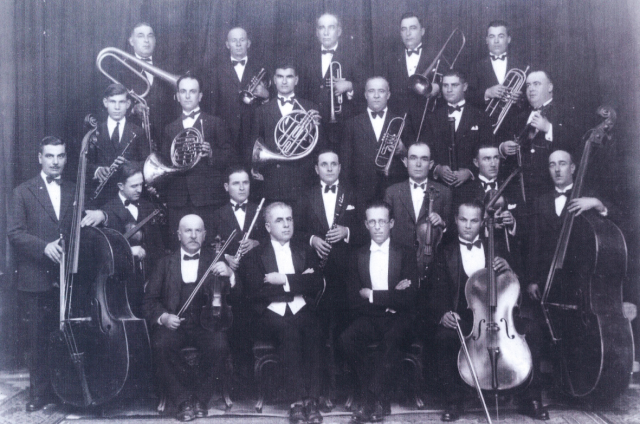 One can distinguish two main categories of styles on these early recordings. The first, is that in the form of local folk song and chant; the ‘authentic’ hybrid of music prevalent in rural society, which reflects the yearnings and aspirations of a folk culture. Evident is the quality of the bards, singers and guitarists who execute these pieces with rich voices and skilful artistry. Most notable amongst these are characters like Xudi, Semenza and Manwel Cilia ‘Ta’Zabett’.

The other styles, such as tangos, fox- trots, and waltzes, reflect the imported influence in music, which resulted in numerous entertainers and dance orchestras, who provided music for entertainment for society in the frivolous 1930s. This cross-fertilization was probably due to the access to early radio, foreign records, and the ‘talkies’.

The lyrically woven and operatic style songs, show the influence and proximity of Latin culture on early 20th century Malta, especially Italian operetta styles, which were predominant in the capital city and amongst the upper circles of society. 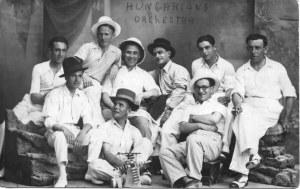 Overall, there is a strong sense of musical and social identity present, mainly due to the use of the local language and dialect. This aspect is especially conspicuous for an era, which was facing socio-political clashes over language in education. It is interesting to note that, in actual fact, both Italian and English words are thrown in with the Maltese language, revealing the multi-faceted culture of the time.

The recordings presented on these early discs of Maltese music, are invaluable documents of local music. As well as being the earliest recorded sound of the country, they attest to the variety of musical genre and activity available at the time. The concept of recorded and documented sound had its impact on musicians and composers; whilst providing them with an opportunity to make a living, it also created the impetus to produce for records under contract by the agents. It was also a unique opportunity for musicians and composers to have their works documented. Thanks to the release of these records, the music and works of these musicians and composers is now documented, and preserved for posterity.

Malta’s Lost Voices Vol 1 is the first in  a series of quality products of Maltese heritage music to be released by Filfla Records.

Early in 1931, the local journal Il-Berka and other popular newspapers, advertised the arrival of a new list of records, produced and sold by local establishment, P.Carabott Music Establishment of Strada Mercanti (Est. 1885). These advertisements boasted a catalogue of 48 records, which were made by the finest local artistes; a contribution of 200 people, it stated, who first recorded in Malta, and later on, in June 1931, in Tunis. The catalogue with Ma matrix numbers, features various composers and conductors, solo musicians, comic artists, operatic and lyrical singers, poets, guitar soloists, a mandolin orchestra, as well as a good number of folk, għana (local chant, pron. aana) singers, including women. The front-cover of the 1931 catalogue, displays A.Gerada’s splendid label illustration depicting the Valletta port and called Dischi Maltin. The Odeon logo of the classical dome, appears next to Gerada’s illustration. The catalogue clearly aimed to present a wide range of artists and genre, making it appealing to various strata of society. It is by the newspapers of early 1931, that some of the recordings carried out for the catalogue were recorded first in Malta, and in Tunis a few months later. 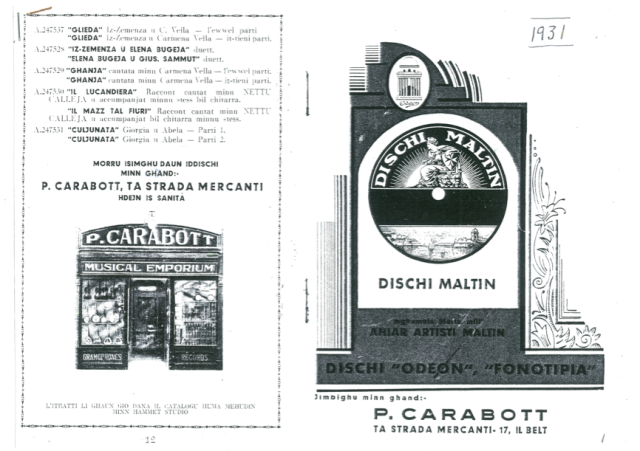 It is claimed that, that same year, the owner of the establishment, Louis Carabott, arranged for the engineers of Deutsche Grammophon label, to bring their recording equipment to Valletta and execute the recording of the titles in the catalogue. Due to the lack of proper recording space, it was customary to use makeshift studios. In this case, it is reported, that a large hall in Valletta was identified to carry out such a purpose. The soundproofing of the hall, which was an engaging task, consisted of heavy curtains, drapes and carpets. The hall would have had to be large enough to seat considerably large numbers of orchestra musicians and a 70-piece choir, as well as many other smaller units of musicians.